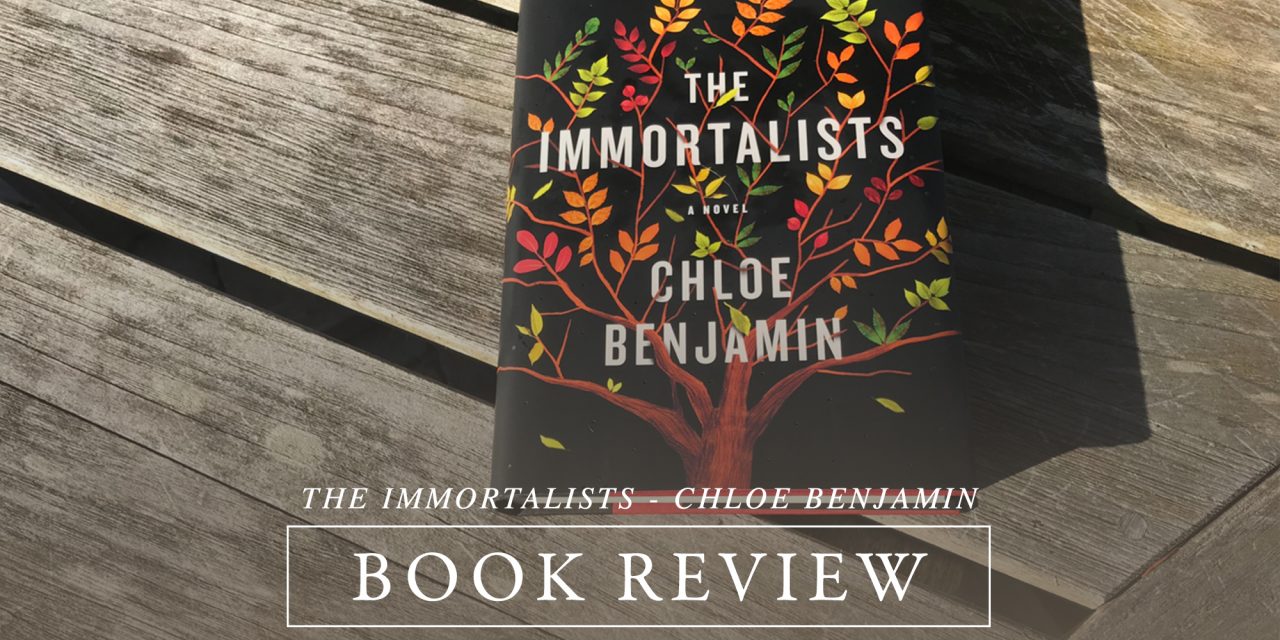 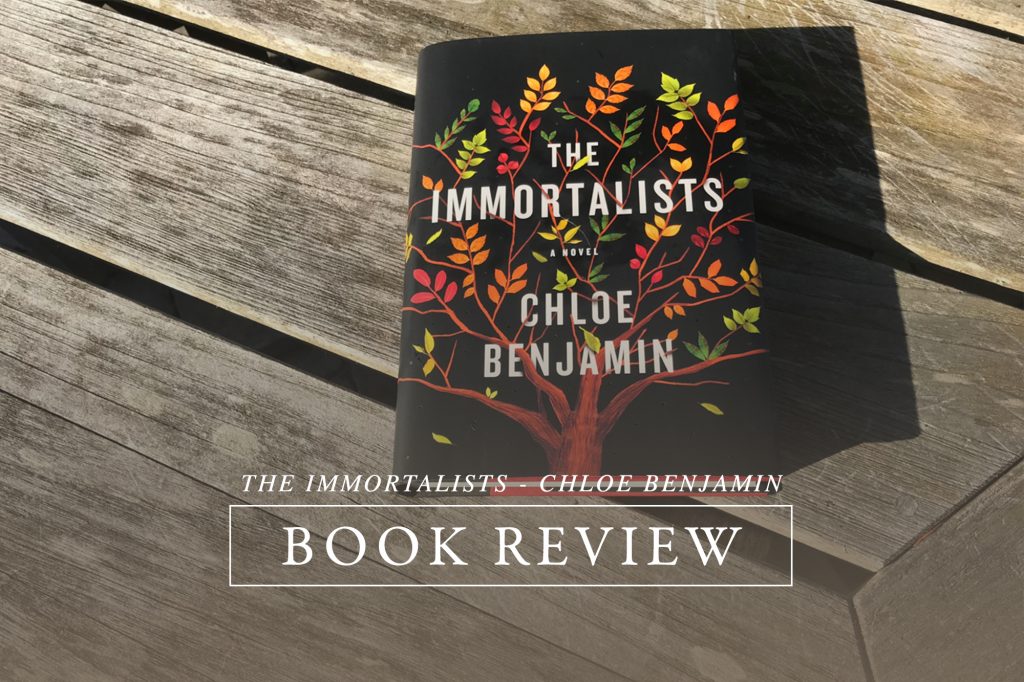 I finished The Immortalists  the other day, a second novel by Chloe Benjamin. Full disclosure – I haven’t read her first book and in fact, cannot even remember why I picked this one up. The cover blurb may have struck my fancy, I’m not sure.

The story starts in 1969; the Gold family lives in New York City, and the story centers around the four siblings Varya, Daniel, Klara, and Simon. That the Gold parents are observant Jews is emphasized in the first section of the book, although it only comes up peripherally in the remainder of the story. Varya is 13, Simon the youngest is 7. They inciting event in the story is that the children have heard about a psychic or fortune teller who can tell people the exact day that they will die. After asking around the neighborhood, the children visit the psychic as a group, although when the get to her apartment, the psychic will only see them one at a time. Several of the four are upset after talking with the fortune teller, especially Simon. Simon also won’t tell his siblings what he learned other than to say that she told him he will die young.

The remainder of the book is broken up into four sections – one section that tells the story of each child’s life. In an interesting audio interview with Signature that I found here, Benjamin, responding to the interviewer’s question agrees that the story has Rashomon-like structure. Actually, I disagree with that assessment – Rashomon tells the story of a single incident from the four particpants’ points of view, each section being a different aspect of the same physical incident. Kurosawa then shows, in the climactic scenes in the film, by providing additional detail and context, that the four separate viewpoints merge into a single truth. Which isn’t really what happens in The Immortalists.

I found that The Immortalistswas much more similar in structure to The Deptford Trilogy, written by Canadian author Robertson Davies. The Deptford Trilogy consists of three books, written in the early 1970s, that tell the life stories of three boys who grew up in a small fictional town in Ontario, Canada around the time of WWI and how their lives are affected by a single precipitating event. The opening scenes in the first book explain that a boy, Percy Staunton, throws a snowball one winter afternoon at another boy, Dunstan Ramsey. Ramsey ducks at the last second and the snowball hits a pregnant woman instead. The woman goes into labor and gives birth prematurely to a boy named Paul Dempster, who has lifelong physical issues related to being born so prematurely.

The first book in the trilogy is called Fifth Business and recounts the precipitating event and then goes on to tell the life story of Dunstan Ramsey. Tortured by guilt for ducking a snowball meant for him, he becomes a college teacher after being badly injured in WWI and honored as a war hero. The book also tells the story of Percy Staunton, who is seemingly unaffected by the incident (or much of anything), and who goes on to become a wealthy businessman and Canadian politician. The woman hit by the snowball, Mary Dempster may or may not be insane, but in any case spends years in an insane asylum, which only adds to Dunstan’s feelings of guilt. Ramsey befriends Mary’s son Paul and teaches him some basic card tricks. Paul eventually drops out of school and runs away to join a circus. While traveling some years later, Dunstan meets a famous magician, Magnus Eisengrim, who Dunstan eventually finds out is the now grown Paul Dempster.

The second book in the trilogy is The Manticore, and tells the story of Percy Staunton’s life through a series of conversations that Percy’s son David Staunton has with a Jungian psychoanalyst. The grown-up David is a successful lawyer who undergoes a spiritual crisis as he learns through therapy that his father was not moral hero that David had thought.  David eventually comes to hate Magnus Eisengrim through a twisted logic that the boy born as a result of the precipitating even is somehow the person responsible for David finding out the true nature of his father.

Paul Dempster/Magnus Eisengrim’s story is the subject of the concluding book in the trilogy, World of Wonders. Magnus comes to tell the story of his life in this book as he relates his experiences to a movie studio that is making a biographical film of the French magician Jean Eugène Robert-Houdin. Magnus’s story covers some of the same ground as the first two novels, but from his viewpoint, however, the story is really of Magnus’s life in the world of magic, circuses, and vaudeville.

Long explanation, but I can strongly recommend reading The Deptford Trilogy – Robertson Davies was an excellent writer and this trilogy is probably his best-known work (although Rebel Angels (part of The Cornish Trilogy) is also well known and an excellent book).

Anyway, that’s my argument for The Immortalists being more like The Deptford Trilogy than Rashomon.The Immortalistsspends a lot of time in the San Francisco Bay Area after the first part introducing the psychic is explained. Klara and Simon run away to San Francisco in the late 1970s, Simon comes out as gay and Klara tries (successfully) to find herself. This part of the book reminded me of a cross between The Deptford Trilogy and Tales Of The City – the 70s and 80s serialized set of novels set in San Francisco.

Klara eventually becomes a magician and leaves the Bay Area. The third and fourth sections of the book cover the lives of Daniel and, in turn, Varya. Daniel is probably the least well-developed of the characters, Benjamin has said in interviews that she had trouble with a character that was a man as well as a political conservative. [That Daniel isn’t a political conservative may say a lot about whether Benjamin actually knows any.] In any case, the novel covers some big topics: family tradition and the responsibilities family members have to each other, the ethics of animal testing, the ethics of life extension research and the philosophy of whether humans should be seeking to artificially extend our lives, and place of magical realism in a modern world. The book touches on, but I’d like to have seen explored in more depth, the idea of predestination – it’s really the underpinning of the precipitating event but it isn’t discussed much in the book.

Lastly, the only real criticism I have of the book is that the ending seems rushed – without giving any spoilers, a previously unknown person from one of the character’s past is introduced toward the end of the book and that portion of the book (again, it touches on the entire predestination thoughts) maybe should have been fleshed out more.

All in all, I thought the book was a worthwhile read, although I’m (obviously) also recommending The Deptford Trilogy.